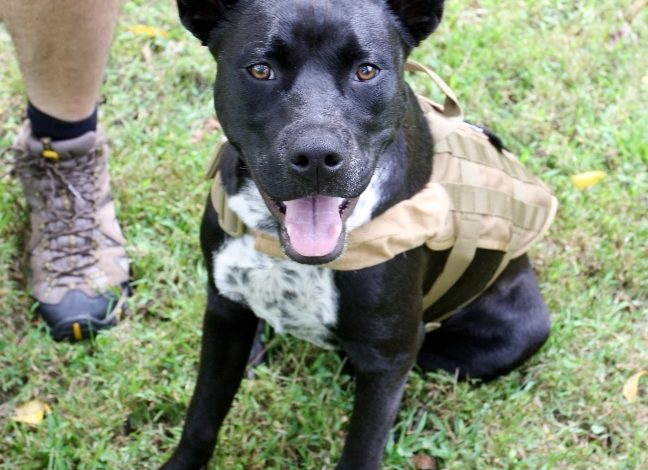 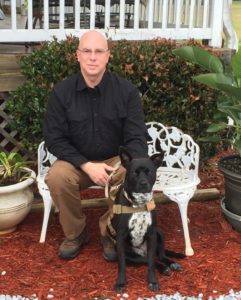 George Lamb is a medically separated Marine with 16 years in service including The Gulf War. His job within the DOD requires Lamb to conduct presentations and attend high-level meetings with DOD and VA leadership. Due to his service-connected health issues, Lamb was having difficulty in the workplace. This is George’s story about getting a service dog:

“For the last 25 years, I have had problems with my health and some anxiety issues. I had started speaking to my Internist who has a degree in psychology as well, and she asked me if I ever considered a Service Dog. In doing research on service dogs, I realized that purchasing one was beyond our budget.

I like to think that my situation is a little different than most as my experience with Layla is a bit like “the cart before the horse.” While attending a meeting at the Pentagon, my wife texted me and asked if we could rescue a Pit Bull puppy, I responded “yes.” So, a few days later we drove to North Carolina and picked up Layla.”

At that time, Layla was only three days old, and a couple of weeks later the Lamb’s rescued her sister Zoe. The bond between the Lamb’s and these sisters is phenomenal. It is one that occurs with many dogs and their owners.
“As Layla got older, we noticed she would seek me out when she was loose. Her attachment to me became so noticeable I couldn’t go anywhere without her trying to follow me and crying when I was out of sight.” 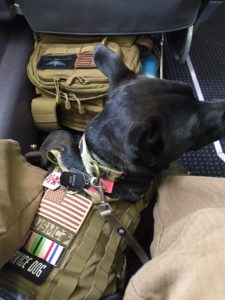 George and his wife attended the annual DOD Warrior Games in 2015 which was held in Quantico, Virginia. It was there he met Christopher Baity, founder of Semper K9 Assistance Dogs. It was then that George and Layla’s journey would begin. “By this point, we had also adopted Layla’s sister, so we took both dogs to Semper K9. Chris helped me to prepare for not only day to day training objectives but additional tasks like retrieving a med pouch and assistance with stability. Chris would give us training tasks each week, and we would return to demonstrate our progress.”

Layla flies with George to events and assists him with his PTSD as well as being a medical alert dog. She is a stabilizing force mentally and physically and an invaluable part of his life. She has visited the Pentagon, Defense Health Agency, Veterans Affairs Central Office, and Disney World among other places, right beside her handler. George leaves this advice for any veteran seeking to add a service dog in their family, “Don’t be afraid to ask for help. Evaluate yourself and if you feel like having a service dog is right for you then go for it.” It is not always an easy process, “It is a long road but worth it. It’s just something you have to stay on top of and be serious about.”