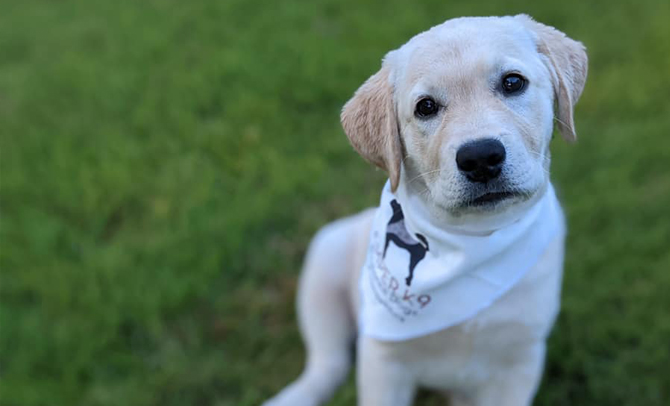 Semper K9 is excited to welcome Wiley into our service dogs for veterans program. Wiley is a 4-month-old yellow lab donated to our program by Graystone Retrievers. Wiley is named in memory of Tuskegee Airman, COL James T. Wiley. Semper K9’s Wiley is sponsored by TREA The Enlisted Association. 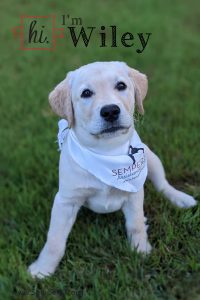 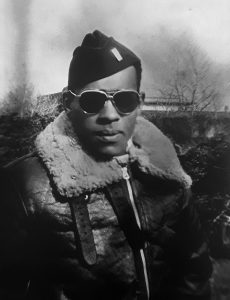 James Thomas Wiley was the grandson of a freed slave who settled in Pennsylvania after the Civil War. James received a scholarship to the University of Pittsburgh and earned a degree in Physics. Because of the racial climate at the time, he was unable to find a job in his field, so James accepted a job as a chauffeur while he looked for other options. When he heard about a government program to train pilots as the country inched closer to entering World War II, James jumped at the opportunity. His pilot training led him to the Air Base in Tuskegee, Alabama where he worked as an instructor before enlisting in 1942 and joined the 99th Pursuit Squadron of the Army Air Force.

In April of 1943, the 99th Pursuit Squadron reported to North Africa and flew many successful ground attack missions. Later Lieutenant Wiley’s unit provided air support for the Italian invasion and participated in the air battle over Sicily. Throughout his time in theater, Wiley completed 101 combat missions in his P-40 fighter plane. 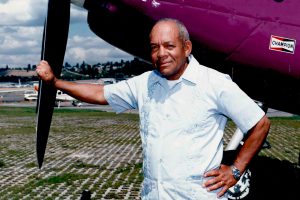 In 1944, Lieutenant Wiley returned home a war hero, but being African American, he wasn’t always treated like one. The Tuskegee Airmen were forced to wait to leave their transport ship home until all the white Soldiers had disembarked. He did receive a warm welcome home to Pittsburgh where there was a parade held in his honor, but when he later returned to Alabama, he was instructed to move to the back of the bus he was riding. Even after the military was integrated in 1948, Wiley and another black pilot were forced to enter their hotel through the back entrance when they delivered bombers to Nellis Air Force Base near Las Vegas.

Despite this, Wiley continued to honorably serve his country in the newly established Air Force, not retiring from his military career until 1965. COL Wiley (Ret) then went to work for Boeing in Seattle where he lived until his death in 2000.

James Wiley’s bravery during the war and his continued courage and service back home in America will be honored through our service dog candidate, “Wiley,” who will one day be a rock for his veteran. 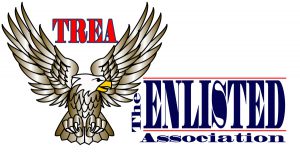 Wiley is proudly sponsored by TREA The Enlisted Association.