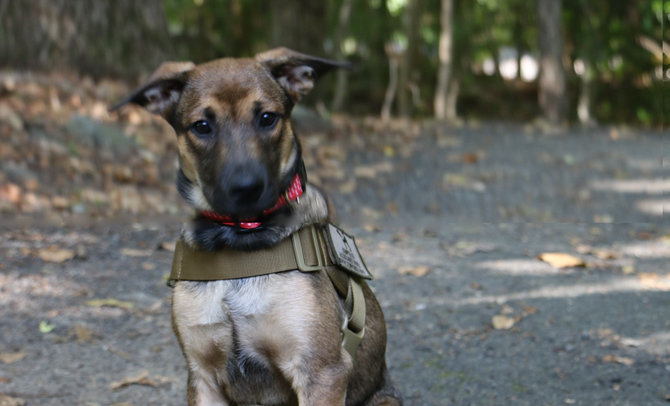 Semper K9 is proud to introduce Ruby to our Service Dogs for Veterans program. Ruby is a 3-month-old shepherd mix who comes to us from the Neonatal and Domesticated Feral Animal Rescue. She is named in memory of Army Nurse, Colonel Ruby Bradley, one of the most decorated women in US military history. 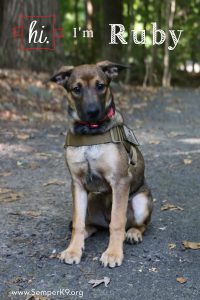 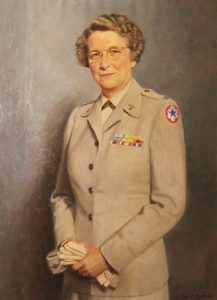 Ruby Bradley was born near Spencer, WV on December 19, 1907. In 1926, she became a teacher after graduating from Glenville State Teachers College. Then in 1930, she changed course and began attending Philadelphia General Hospital School of Nursing. She graduated from nursing school in 1933, and on October 16, 1934, she was commissioned as a 2LT in the Army Nurse Corps. 2LT Bradley began her nursing career at Walter Reed General Hospital in D.C., where she worked as a surgical nurse until being assigned to Station Hospital at Fort Mills, Philippine Islands in February of 1940. A year later, Bradley was transferred to Camp John Hay on Luzon Island where she was a hospital administrator.

Just hours after the attack on Pearl Harbor, the Japanese attacked Camp John Hay and Bradley, along with a doctor and another nurse, took to the nearby hills to hide. Three weeks later they were captured by the Japanese and became prisoners of war. Bradley helped set up a small dispensary for the POW camp and at great risk to herself smuggled medications and surgical instruments from the camp hospital. Soon Bradley and the other nurses started tending to the sick and injured captives. 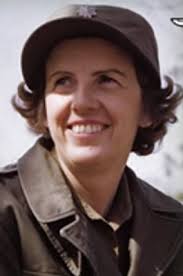 In 1943, Bradley was moved to the Santo Tomas Internment Camp in Manila. It was there that she and the other nurses began being referred to as the “Angels in Fatigues” by their fellow captives. She continued to lead the captured medical staff in providing medical assistance to the other prisoners and did what she could to feed the starving children being held there. The POWs subsisted mainly on rice, just half a cup in the morning and half a cup at night, but Bradley shared her limited rations with the children, often going hungry herself. She lost so much weight that she would hide extra food for others and medical supplies in her loose uniform whenever she could get her hands on them.

On February 3, 1945, U.S. troops liberated Captain Bradley and her fellow prisoners ending her captivity that had lasted over three years. She weighed just 80 pounds when she was rescued.  Over the course of her imprisonment, she assisted in 230 surgeries, delivered thirteen babies, and tended to countless sick and injured POWs. 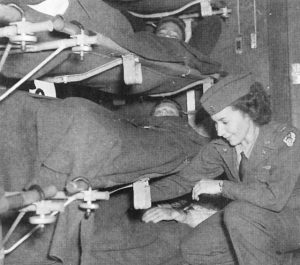 After her recuperation, Captain Bradley served as the Assistant Chief Nurse at Fort Meyer and McGuire General Hospital in Virginia, then as Chief Nurse at Fort Eustis, Virginia. Bradley then continued her education and received her Bachelor of Science degree from the University of California in 1949. After her time in California, Bradley returned to work at Walter Reed before serving as Chief Nurse for the 171st Evacuation Hospital at Fort Bragg, North Carolina.

In July of 1950, Major Bradley deployed to Korea where she served as a frontline nurse in evacuation hospitals. In November of 1950, during a Chinese counter-offensive, Bradley was being overrun as she treated wounded Soldiers after an ambush. A plane arrived to evacuate Bradley and the Soldiers she was treating, but she refused to board until all of the wounded were loaded. Surrounded by 100,000 Chinese soldiers, she was the last one to jump aboard the plane just as her ambulance was hit by an enemy shell and exploded. In 1951, Major Bradley was named Chief Nurse for the Eighth Army and supervised over 500 nurses throughout Korea.

When Major Bradley left Korea in June of 1953, she was given a full-dress honor guard ceremony, the first woman to ever receive a national or international guard salute. Back in the states, Bradley served as Chief of the Nursing Division with Headquarters 3rd Army at Fort McPherson, Georgia and was promoted to Colonel in 1958, just the third woman in U.S. Army history to reach that rank. Colonel Bradley then served as Chief Nurse with Headquarters U.S. Army Europe in Heidelberg, Germany. 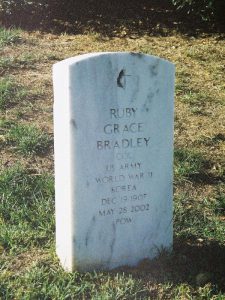 Colonel Ruby Bradley retired from active duty on April 1, 1963, and returned to West Virginia where she lived out the rest of her life. Ruby Bradley passed away on May 28, 2002, at the age of 94. She is buried at Arlington National Cemetery.

Always humble about her achievements, Colonel Bradley told a reporter in 1991 that she never saw herself as anyone special. “I want to be remembered as just an Army nurse,” she said.