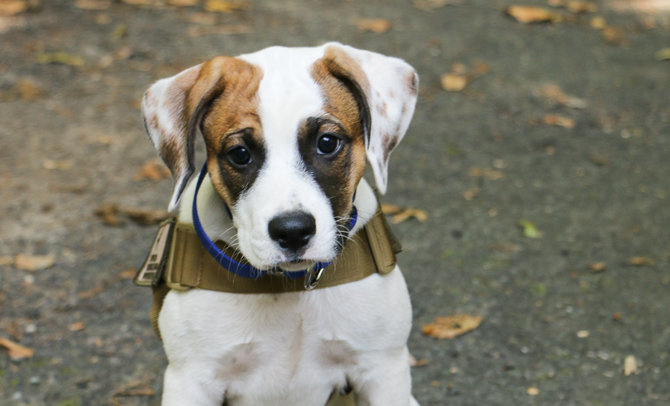 Semper K9 is proud to announce the addition of Grace to our Service Dogs for Veterans Program. She comes to us from our rescue partner, Operation Paws for Homes. Grace is a 16 week old Lab mix named in memory of Commodore Grace Hopper, USN. 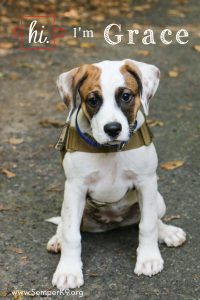 Grace Brewster Murray was born on December 9, 1906, in New York City and grew up in an academic atmosphere with parents that encouraged her curiosity and valued education. Grace excelled at school and in 1924, at the age of 17, she began attending Vassar College as a mathematics major. Her professors noted that she had an amazing ability to explain difficult math and physics concepts to other students. Grace graduated from Vassar at the age of 21, with a degree in both mathematics and physics. In 1928, she was awarded a scholarship that took her to graduate school at Yale University. Two years later, at the age of 23, she earned her master’s degree in mathematics and married Vincent Hopper. 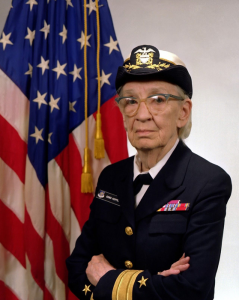 During the depression, Grace worked as a mathematics assistant at Vassar College, where she was a very popular teacher who loved to incorporate new ideas into her teaching and share her passion for math with her students. She submitted a thesis entitled The Irreducibility of Algebraic Equations to Yale and, at the age of 27, received her Ph.D. in 1934. She continued working at Vassar, moving up the ranks, and by 1941 was an associate professor when America entered World War II.

Grace immediately wanted to join the military, but she was refused because she was too light for her height and her job training mathematicians at Vassar was considered too important for her to leave. She was persistent, however, and in 1943, Vassar gave her temporary leave and she was able to join the Naval Reserve, after receiving a waiver for her weight. She attended the Women’s Midshipman School in Northampton, Massachusetts, where she excelled at the grueling training, achieved the highest training rank, and graduated first in her class in June of 1944. 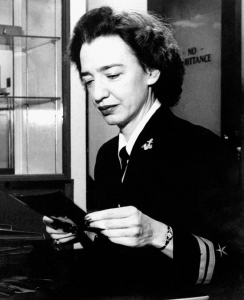 After graduation, Lieutenant Grace Hopper was assigned to Commander Howard Aiken’s Computation Laboratory at Harvard University, where she quickly earned the respect of Aiken and the other members of the team who were working on the Mark I computer. Hopper’s first major project was calculating gunnery tables needed by the Navy to aim their guns accurately, accounting for conditions such as wind speed, the weight of the shell, and air density. All this required a huge number of calculations, which was an ideal job for the new computer that could perform calculations in a day that had previously taken a month. Lieutenant Hopper often slept next to the computer, repairing it whenever something went wrong. At the end of World War II, Lieutenant Hopper was offered a full professorship back at Vassar, but she turned it down, choosing to stay at Harvard with the Naval Reserve, working in the new and rapidly developing field of computers.

In her new role, Hopper began working on a way to make computers accessible to businesses for wider use. Computers needed to be able to take more human language and translate them into machine code. This type of translator is called a compiler and in1952, Hopper and her team invented the world’s first compiler, the A-0 system. In 1954 she was promoted to Director of Automatic Programming Development for the company which had then become Remington Rand. 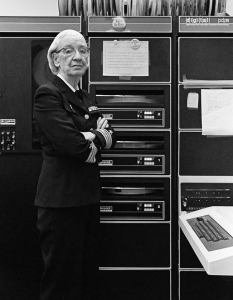 She continued to work on creating a computer language that relied on English words instead of mathematical symbols that could be used much more widely in business. She soon developed B-0, later becoming FLOW-MATIC, which revolutionized computer programming. In 1959, Grace Hopper was a technical consultant to the committee that developed COBOL, which became the dominant computer language for businesses in the 20th century. In the year 2000, about 240 billion of the 300 billion lines of computer code ever written had been written in COBOL.

In 1966, Commander Grace Hopper retired from the Naval Reserve; however, she was called back to active duty in 1967 to help standardize the Navy’s computer languages. At the age of 76, Grace Hopper was promoted to Commodore at the White House in 1983. Her rank was later reassigned to Rear Admiral in 1985. At her retirement in 1986, she was the oldest officer on active duty in the U.S. Navy at 79.

Grace Hopper received many awards over the years including the National Medal of Technology from President George Bush and in 1969 she was named the first Computer Science “Man” of the Year. In 2016, she was posthumously awarded the Presidential Medal of Freedom. 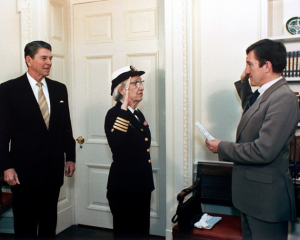 After her retirement, Grace Hopper continued working in the world of computing, inspiring and teaching countless young computer scientists. She died in her sleep of natural causes in 1992 and is buried with full military honors at Arlington National Cemetery. In 1997, the Navy named a new guided-missile destroyer in her honor: the USS Hopper.

Grace is sponsored in part by CACI Cares.