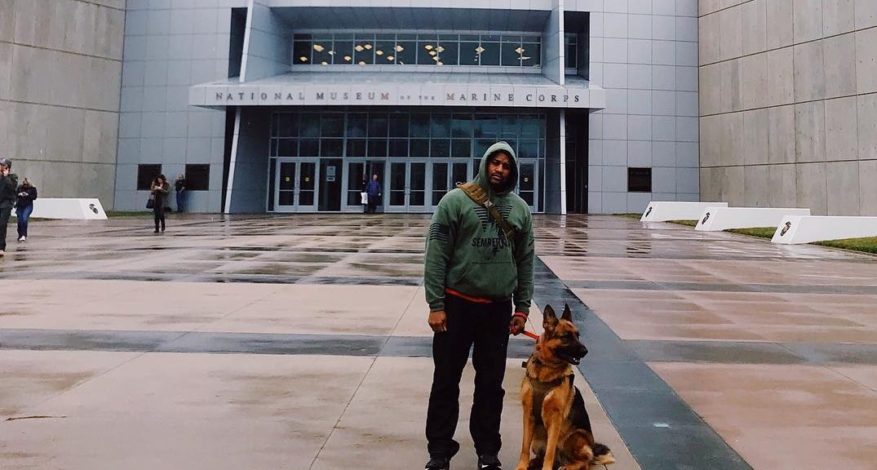 Kelvin Valdez retired from the Marine Corps in 2015 but still has a battle buddy at his side- his service dog Belleau.

Born in Brooklyn, Valdez enlisted in the Marine Corps in 1998 and spent nearly 18 years serving his country at various duty stations and on deployments. This father of three now resides in Northern Virginia, along with his wife Valerine, an active duty Marine herself until a few years ago.

Although they both sought counseling to deal with personal issues relating to deployments and military life, the addition of Belleau has eased their transition into the civilian world.

Before Belle, as she’s affectionately called, Kelvin suffered from constant nightmares and daily anxiety. “If I were in a large crowd of people I’d be looking for the exit,” he says. “I faced a lot of mood swings that affected my relationship with my family, my friends, and others around me.”

Valerine was in tune to Kelvin’s panic attacks, even if he wasn’t always aware they were starting. But one day, while Kelvin was working out at the gym, someone else recognized what was happening. “A Marine who happened to own a service dog took notice,” says Valerine. “He gave Kelvin the number of a guy to talk to.”

That guy was Chris Baity, who founded Semper K9 Assistance Dogs with his wife, Amanda. Baity, a combat veteran and former Marine Corps dog handler, rescues shelter dogs and trains them for veterans with service-connected disabilities- completely free of charge.

Valdez applied to Semper K9 and soon began training with Baity and his dogs to learn the commands. Valdez feels the process of getting approved for a service dog was straightforward and didn’t cause him any extra stress. “Everyone from my physician to the psychologist, to Semper K9 gave me exceptional support!”

Eventually, Kelvin met a young German Shepherd that had been donated to Semper K9, “It was love at first sight!” says Valerine, pulling up the photo on her phone of when handler and service dog first met.

“Truth be told, as a Marine, there is nothing more proud to hear the name “Devil Dog” when someone addresses you,” says Kelvin. “My service dog’s name is Belleau- deriving from the great battle fought by the Marines in which we adopted the name ‘Devil Dog.’”

With leash in hand and his battle buddy by his side, Valdez became part of a military-minded community of fellow veterans, thanks to Semper K9. “They are an outstanding family- driven and operated organization whose true spirit, mission and vision are to assist veterans with the support, education, and feasibility of obtaining a service dog.”
Valerine agrees wholeheartedly about their experience with the organization. “A dog is coming from a military family and going to a military family. Holistically their approach to the mission is a perfect fit for veterans.”

“Belle is our family’s dog,” says Valerine. “I take her on runs, the boys interact with her, but Kelvin is her handler, and her focus is on him. The minute the service dog vest is on her, she knows her purpose.”

In the time that Belleau has been part of their family (even becoming BFFs with the family Chihuahua), Kelvin can see a change in himself.

“Having a service dog has allowed me to become more social, the ability to be in a large crowed area without feeling that heavy load of anxiety building up in me. It has also helped me A LOT with my mood swings which in turn has positively increased my involvement with my family and friends.”
Valerine agrees, “He’s no longer has a need for medications, the kids can see a difference in him, and he has a chance to mentor fellow veterans now- that was something he was missing.”

Valdez encourages any veteran who is considering a service dog to do as much research as possible. “Dogs are awesome creatures, and for some, a service dog will help them with their everyday struggles, but for others, it may add to them. My recommendation is to read, read, read as much as you can and educate yourself before making this huge commitment. Ask yourself- are you a dog person?” Thanks to the support of his family, Semper K9, and Belleau- the answer is Yes for Valdez.